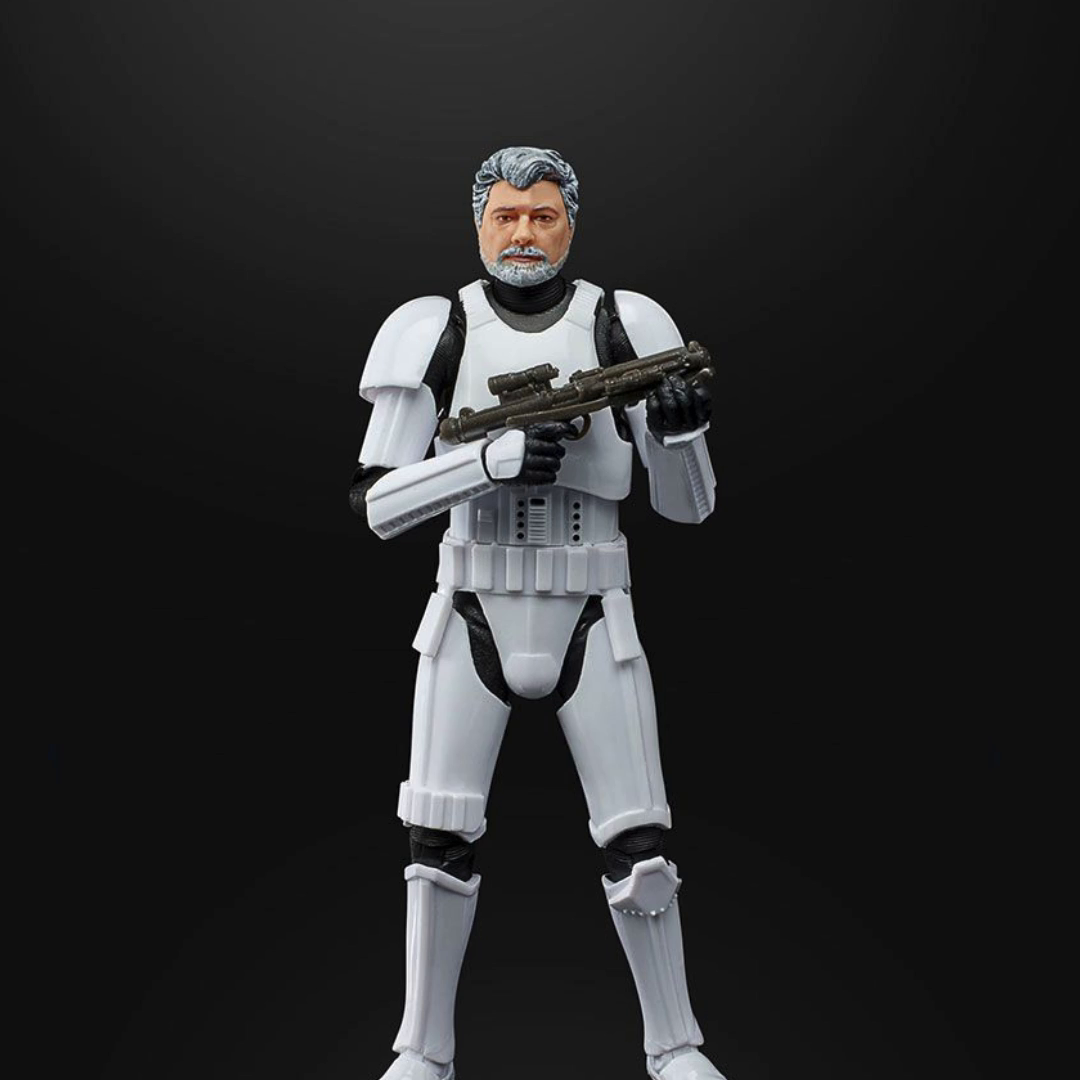 Star Wars fans, get excited because @hasbro will soon release a George Lucas Stormtrooper action figure!To celebrate Lucasfilm’s 50th anniversary, the creator will be immortalised in figurine form. The 6-inch action figure features George Lucas in Stormtrooper armour and even comes with a removable helmet and blaster!While it won’t be released until 2022, you can pre-order from September 29! Will you be adding this to your collection? Let us know in the comments!

Gamers unite! Did you know that @logitech is teaming with @riotgames to bring us an epic @leagueoflegends gaming collection?! We’re talking Logitech G’s PRO Wireless Gaming Mouse and PRO Mechanical Gaming Keyboard, a mouse pad and a PRO X Gaming Headset. We’re in love! The new collection drops November 1st so tag a friend who needs to know ASAP!

This Rolling Stones float is sure to turn heads this summer! @sunnylifeaustralia has created the ultimate beach float for you to relax and spend your days on. The rock and roll inspired float is trendy, iconic and fun! You can rest your head against those juicy red lips and sprawl out on the tongue. Know anyone who’s obsessed with the Rolling Stones? Tag them!

Call yourself a basketball fan? Have a favourite NBA team? Now you can show your support by wearing their colours and makeup products to their next game! @colourpopcosmetics have teamed up with the NBA (pun intended) to bring us a massive b-ball inspired line. There are 6 teams to choose from: the Los Angeles Lakers, the Boston Celtics, the Chicago Bulls, the Dallas Mavericks, the Golden State Warriors and the Miami Heat.The drop will feature eyeshadow palettes, gel liners, face stickers, glitter face gel and makeup bags. And it launches this Friday October 15th!Tag someone who needs to know!

It’s almost Halloween which means we’re all on the hunt for the perfect spooky costume, but you probably haven’t thought about giving your furry friend the ultimate festive glow-up.With your pets comfort in mind, these Halloween costumes are sure to leave your pet feeling and looking like the star of the show (which they always are). From spiders, The Joker, lions, bats and even dinosaurs, these costumes are available for both cats and dogs no matter their size! : etsy

@zayn and @arnette have just released their sunglasses collab!Featuring 4 retro and futuristic styles, the collection is inspired by 90s aesthetics and ZAYN’s own art They’re also sustainably made from bio-based materials only! ♻️Which one’s your favourite? Let us know in the comments!

Just when you thought you had all the makeup you needed @sephoraaus has launched @guccibeauty! With a huge foundation range to choose from, vibrant lip shades and creamy liners, this perfectly-packaged makeup line is everything! Tag someone who loves Gucci and needs to know!

Looking for a new spicy shirt to add to your wardrobe? We think we’ve found it! @ginafinehart has created the ultimate Aussie t-shirt. It’s noice. It’s different. It’s unusual. The Kath and Kim T-shirt is designed and hand screen printed in Melbourne. It’s the perfect top to wear out this summer and you can grab it for a nice 40 buckeroos.Tag a friend who LOVES Kath and Kim!

Halloween is all about the crazy, creepy and strange outfits. But we often forget about our nails and tbh, they’re the place we can have the most fun!These Halloween themed Scream tattoo nails are perfect for everyday October wear or for your Halloween themed party. Scary but adorable, these nails will be the talking point amongst all your friends. Trust us! : etsy

If you love having your phone on hand but out of the way, these trendy iPhone cases turn your phone into a purse in seconds!Not only practical, these cases will complement any outfit and be a statement piece all on their own! Trust us, if you’re as obsessed with them as us, you’re gonna wanna get in quick. : Etsy

If there’s one thing we love about summer it’s the beach, but with that comes A LOT of sand and a lot of mess. That’s why we’ve become obsessed with these sand-free towels from @tesalate that bring comfort, style and sand-free adventures all summer long. Available in multiple designs and sizes, these beach towels are sure to become your summer essential!

This Phone Case Doubles As A Gameboy

If you’re looking for a multi-functional phone case that can also be used for games. Well, you’re in luck. This epic cover has a built-in gaming console, so bus rides aren’t so boring anymore.

Keep your pupper sun safe while looking hella stylish with these groovy glasses. The Pet Glasses feature a durable metal frame that ensure comfortably, while the sleek finish will have the puparazzi barking up a storm!

As well as being clad in Baby Yoda green, the waffle maker is resplendent with a sticker of the Child himself on its top, hovering around in his adorable little space-bassinet

Play a game of Monopoly but with a true-blue Aussie twist! With famous Australian landmarks and locations, plus you can play as a meat pie! Who could say no to that?

BUY FROM Myer on eBay

If you’re a wannabe wizard who dreams of life at Hogwarts, well, you’re not alone! That’s why we’ve found these magical Mandrake Rootlings that you can add to your home to add some much needed magic to the muggle world. The best part? These baby Mandrakes even scream when you push them down! Don’t worry, they’re still young enough to not cause any permanent damage!

Can’t believe they didn’t use the term Baby Yoda in the name, but I guess “The Child” is the official name, and maintains a bit more mystery. As someone who thoroughly enjoyed every moment of The Mandalorian, I’m so psyched by this set, especially the Baby Yoda Brickheadz, complete with the hoverpram.

Ensure maximum comfort all year long with the Pet Trampoline. Made for reclining in style, the gentle cushioning provides comfort, while the high-quality yet breathable fabric will ensure years of use.

ATTENTION ALL GAMERS! The cinematic trailer for Star Wars: Hunters is finally here! The game takes place on Vespaara following the Return of the Jedi, featuring battles between Sith warriors and Mandalorian bounty hunters, as well as iconic characters like Stormtroopers and droids Star Wars: Hunters will be available for the Nintendo Switch, on the App Store and Google Play in 2022! Best of all, it’s FREE to download! If you want exclusive access to in-game content, be sure to pre-register before its release! Tag a gamer or Star Wars fan!

BIG W Is Slinging A Budget-Friendly Dupe Of The Oodie

BIG W’s oversized hoodie is an absolute steal at only $40. With a fleecy finish that’s perfectly soft, we know what we’ll be wearing this winter!

This Personal Aircon Is A Summer Must-Have

Stay fresh during the summer heat with this personal aircon from Dick Smith. With a compact design that’s easily portable, whether you’re at work or home, you can enjoy a cool breeze all day long!

The DIY Minecraft My World Series Kit by LEGO brings the action-packed adventures of Minecraft right into your hands. With 550 pieces, the little ones will be occupied all weekend long!

Not So Subtle Plushies

We’re loving these adorable plushies! The squishy cuties come in a range of animal designs, and there’s some ultra-realistic food plushies if you want to get weird!

BUY FROM Not So Subtle Plushies

Make playtime extra fun for your pupper with this Wooden Puppy Treat Dispenser. You can pop various treats in one of the twelve boxes, and watch as your dog eagerly tries to unlock their prize.

This 910-piece set offers an immersive, creative building experience for natural history enthusiasts who will appreciate the authentic details of the 2 dinosaur skeleton models (Tyrannosaurus rex and Triceratops) and the pterosaur reptile (Pteranodon) skeleton toy.

The White House LEGO Architecture kit might be as close as you ever get to the big chief’s house, but it sure is pretty, even in LEGO form. This stylish model showcases the intimate details of one of the world’s most iconic buildings, with key features that truly bring this building to life.

Buy Now From The Gamesmen

Ready to enhance your home workout routine? You need this smart, ultra slim treadmill! ‍♀️The wide shock absorbent belt creates a smoother, more cushioned walk so you can enjoy your workout comfortably from your own home. Plus, you can even control the speed settings via a remote! Once you’re done, you can store it away easily under furniture thanks to its 13cm height.Send this to someone who needs this in their life!

Get Your Gamer On At An Atari Hotel

Atari is in the process of creating hotels that will take you to a new dimension. Perfect for the gamers in your life, this is an escape like no other.